“As a researcher you know very well what cancer is and what the disease involves. We are aware of the importance of research into the disease and of proper healthcare like no one else. But when the disease suddenly strikes in your home environment, it takes on a whole different dimension."

My father was 67 when he got the diagnosis. Prostate cancer. One year later he was no longer there. I can assure you that such a thing is enormously frustrating. As a researcher your whole life focuses on your search for a better cure. And then suddenly you can do nothing when the disease shows its face in your family! I have to admit that I felt very defeated right after that. Fortunately, in the course of time that feeling gave way to renewed energy and dedication. I decided to search for a solution even harder and better. 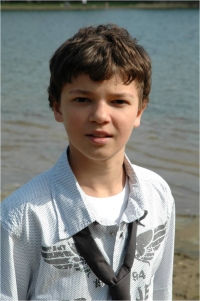 But then the disease struck again. In my youngest son, Pieter. In the photo on the left he is 13 years old. A handsome boy. He gets that from his mother (laughs). Best student in the class, tennis champion. In the photo on the right it is several months later. In the meantime the diagnosis had come in: medulloblastoma, in a very advanced stage. The tumour had already metastasised to various places in his brain and spine. He had to undergo a very difficult treatment, surgery as well as radio- and chemotherapy. His hair fell out, he received tube feeding for over a year, and he ended up in a wheelchair.

But we are enormously grateful that Pieter is still here today. We have that to thank to the progress in scientific research and the outstanding treatment and care he received. But he is not the same Pieter as before, and he never will be. I think this illustrates in a dramatic way that cancer research and treatment have come a long way, but still have a long way to go. That’s why the efforts of researchers are so important. But researchers cannot take on this task alone. The whole population has to participate. Together, we all have to create greater awareness and promote prevention. We also have to collect the necessary money together, so that researchers can really do research instead of searching for money. And we have to support patients and their families together.


That is exactly what the Foundation against Cancer stands for. Moreover, those values are prominent in the Foundation’s Relay for Life. The first Relay for Life in the Leuven area took place in the spring of 2014. We decided to participate with our team “Pieter”; me as the team captain, Pieter as a Survivor. In the months before the event Pieter looked at the website almost every day to see who was taking part on our team.

No fewer than 64 people registered. A large delegation from Pieter’s school, both teachers and students. Friends from the tennis club. Other patients. Colleagues, lab workers, clinical personnel and caregivers. For 24 hours there was always someone from our team on the track. A team also has its own tent, and ours was warm and cosy.

Pieter looked forward to this event with great anticipation for some time and decided to walk a lap. He succeeded. The look on his face was really indescribable. His proud smile alone after that lap made all the efforts of a Relay for Life more than worthwhile for me. 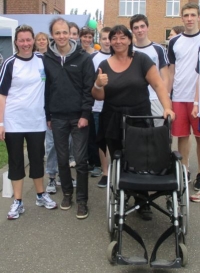 In the evening when it got dark the Luminaria Ceremony began, a time to remember everyone who is no longer here today because of the disease. Literally thousands of candles lit up the whole track. We ourselves prepared a Luminaria for my father who died of prostate cancer and wrote a few lines on it. It was a very emotional moment.

But what I will never forget is the almost festive atmosphere. At a Relay for Life you celebrate hope, you celebrate life. Together with all the others present we succeeded in making something beautiful and heart-warming from something as ugly as cancer. How we did that I still don’t exactly know, but I am certain that we will succeed again next year. And Pieter is already counting down! I have one appeal to everyone: take part in a Relay for Life. You find them everywhere in Belgium. Together we can conquer the disease, together we can give patients like Pieter renewed hope for a bright future.”

Motivate your friends to support Relay for Life through social media

To the question form